Mountains, Barrier Reef and Turquoise Waters for your Caribbean Getaway 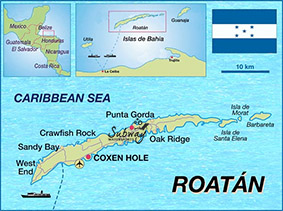 60 km (37 miles) long and less than 8 km (4 miles) wide, Roatán, is located between the islands of Útila and Guanaja, and is the largest of Honduras’ Bay Islands. Roatan is surrounded by the Mesoamerican Barrier Reef (second largest worldwide after Australia’s Great Barrier Reef) and unlike other caribbean Islands, Roatan, discovered in 1502 by Christopher Columbus, has kept it’s rustic, Caribbean charm and is not a typical Island where you find big shopping districts and attractions within walking distance. You will find some smaller shops located in Mega Plaza and Coxen Hole but the real attraction

of Roatan is its lush vegetation, stunning beaches, spectacular views and pristine coral reef, all of which is best explored on an independent tour during your vacation.

A tropical mountainous terrain overlooks the dramatic shoreline and the sporadic beautiful sandy beaches. The awesome scenery is interrupted occasionally by small fishing villages. Roatan has a mountainous backbone that provides a splendid view from any point, and is totally surrounded by coral reefs.

Roatan is famous for the superb diving and excellent fishing. This is not your typical over-commercialized vacation spot. The average temperature in Roatan year round is about 80º F, or 28º Celsius with the trade winds providing a gentle breeze. The relative humidity averages 72%. From March until October, the weather in Roatan can be compared to that of Florida; lots of sun with occasional showers. During the rest of the year it will rain more often but rain rarely compromises the diving.

As for the modernization of Roatan, its electrical voltage is the same as in the US – 110 volts AC – 60 cycles. Occasionally, as the power plants shift their generators, the power may cut off. Most resorts have back-up generators. Islanders speak both English and Spanish, and welcome all tourists. The island has a modern airport, phones, faxes, and paved road. However, Roatan is still laid-back! What Roatan can offer are quiet mornings with a cup of coffee, relaxation by the water with a tropical drink, visiting the local villages (still in their natural, cultural setting), viewing the island’s incredible vegetation and wildlife, and, of course, diving or snorkeling!

Just a short distance off shore is the southern end of the world’s second largest barrier reef, which has made Roatan famous amongst divers. There is no better place to dive than the crystal clear warm waters surrounding the Bay Islands. Be among the first to explore the untouched virgin dive sites of Roatan. Surrounded by the Great Western Barrier Reef, Roatan’s waters are full of spires and towers of Star, Starlet, and Lettuce Corals, and the best selection of sponges found anywhere in the Caribbean. You’ll be delighted with the seascape of overhangs, canyons, fissures, and maze of tunnels along the walls of continuous reef. Excellent underwater visibility gives way to a myriad of invertebrate and fish species.

Many cultures have inhabited these islands over the centuries – pirates, slaves and British settlers who farmed to supply the ships that frequented the area. Many of their descendants remain on the island today. Great Britain gave up possession of the Islands in the 1860’s. What you will find today is an interesting mixture of Spanish, English, and Garifuna cultures. Punta Gorda was the first Garifuna settlement in the Bay islands. As the story goes, a group of slaves that were originally off-loaded here during the heat of a battle (the Garifunas) later refused to leave the island and go with the victors. Today these Garifunas still maintain their own cultural identity and language. Most people find that the islands seem more Caribbean than Honduran. All of the Bay Island residents have blended together to create a unique and friendly people who generally speak both English and Spanish.

Around Roatan, the remains of partially sunken ships are common. And although the most frequently visited wrecks were intentionally sunk for scuba diving, their histories are no less interesting than stories involving pirates. Learn more about Roatan’s wrecks and wreck scuba diving.

Experience a new life with one of Roatan’s best dive shops, Subway Watersports, a PADI 5* Resort and Instructor Development Center.